As part of our mission to elevate the health of Cook County, we strive to do more than provide care in our communities.

Now more than ever, we’re committed to using our voice to raise awareness on the issues that impact our homes, our neighbors and our communities locally and nationally. Our goal is to bring real issues to light, create a forum for conversation and provide solutions to impact change.​

COOK COUNTY IS TAKING OUR SHOT 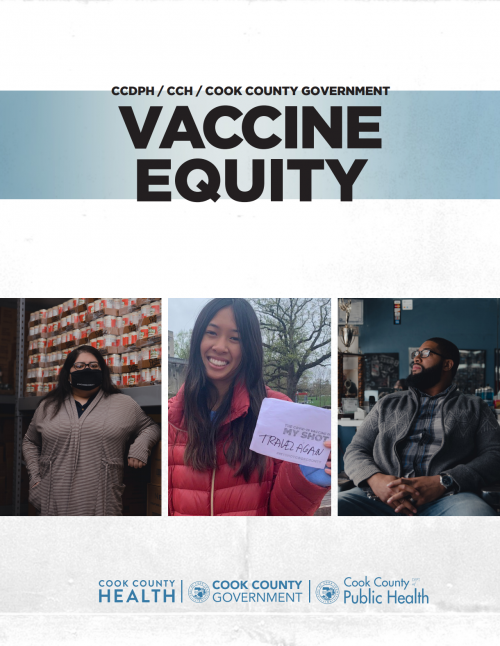 ON THE FOREFRONT OF GROUNDBREAKING RESEARCH

ON THE
FOREFRONT OF
GROUNDBREAKING RESEARCH

Cook County Health, along with all Level 1 trauma centers in Chicago and emergency centers nationwide, is participating in a Department of Defense funded trauma study titled the Prehospital Airway Control Trial (PACT). 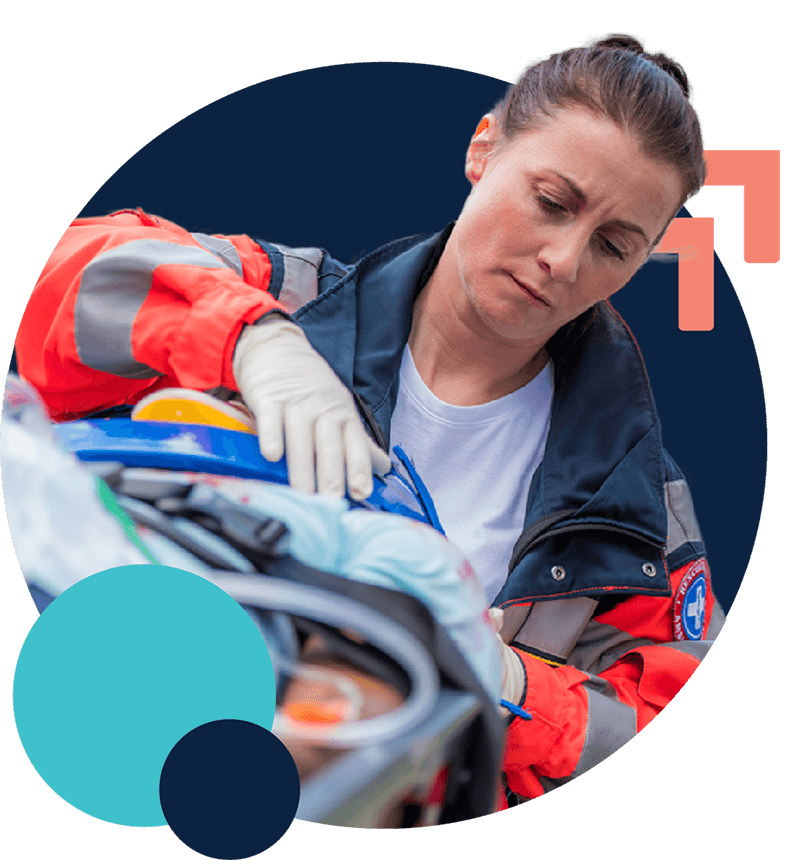 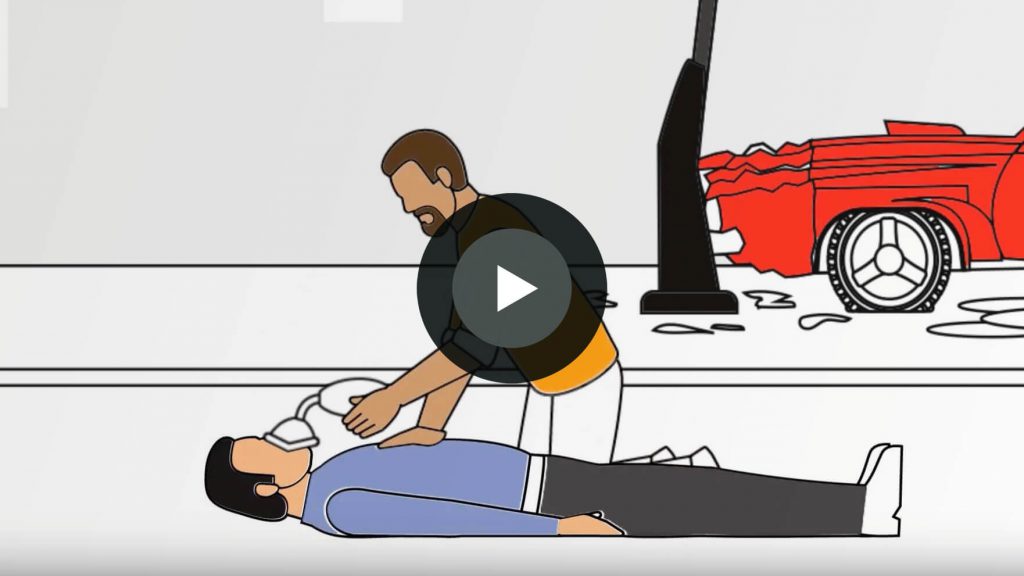 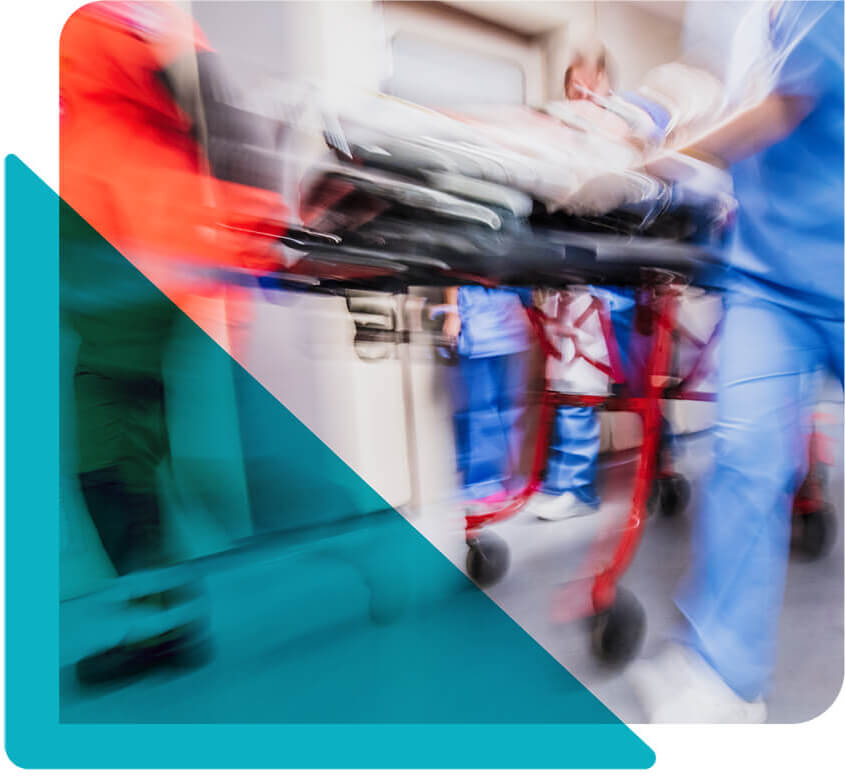 Over the next four years, this trial will compare two emergency breathing techniques to see if one helps trauma patients.

The study is conducted under Exception From Informed Consent (EFIC). This means that trauma patients over the age of 15 who cannot breathe will be automatically enrolled in the study. The patient or immediate family will be informed as soon as possible and will have the opportunity to decide if they want to continue the trial.

Check out our Research page to learn more.

Don’t Get Sick This Flu Season 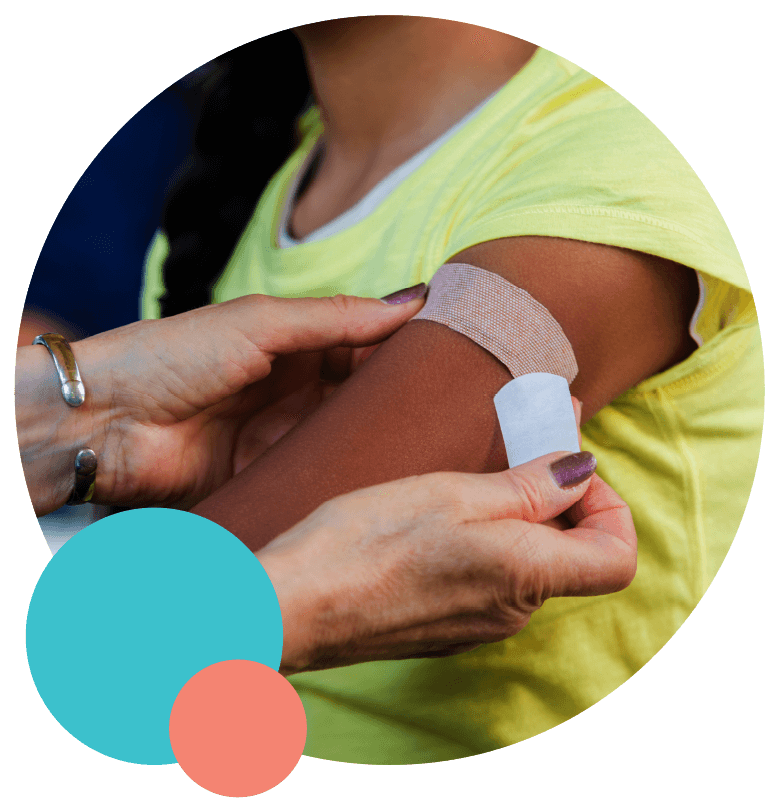 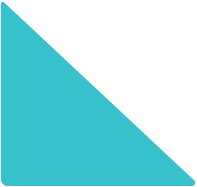 3 Ways to Prevent the Flu

Get the flu vaccine

Everyone ages 6 months and older should get vaccinated every year for the flu. You can visit your Cook County Health community health center or a local pharmacy for your flu shot.

Avoid close contact with anyone who is sick. If you get the flu or feel unwell, stay home from work or school so you don’t spread illness to others. 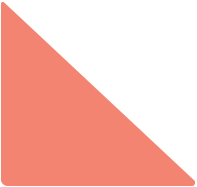 The flu vaccine will give you the flu.

FACT: The flu shot is made from an inactive or “dead” virus, so it can’t transmit infection. The vaccine takes 1-2 weeks to provide protection from the flu. If people get sick after receiving a flu shot, they were going to get sick anyways.

FACT: Everyone older than 6 months should get vaccinated, especially young children, babies, pregnant women, seniors and people who have chronic illnesses. When everyone is vaccinated, it helps the whole community stay healthy.

The flu is just a bad cold.

FACT: Influenza or “flu” is far more severe than a cold. While it can cause symptoms like a bad cold (sore throat, runny nose, sneezing, cough), it’s also the reason over 36,400 people died and nearly 647,000 people were hospitalized in the U.S. last year.

You can’t spread the flu if you’re feeling well.

FACT: 20% to 30% of people carrying the influenza virus have no symptoms.

You don’t need a flu shot each year.

FACT: The flu virus changes every year and so does the vaccine. Getting an annual flu shot is the best way to protect yourself.

Heart disease is the leading cause of death for men & women.

Prediabetes is a serious health issue, where blood sugar levels are higher than normal. 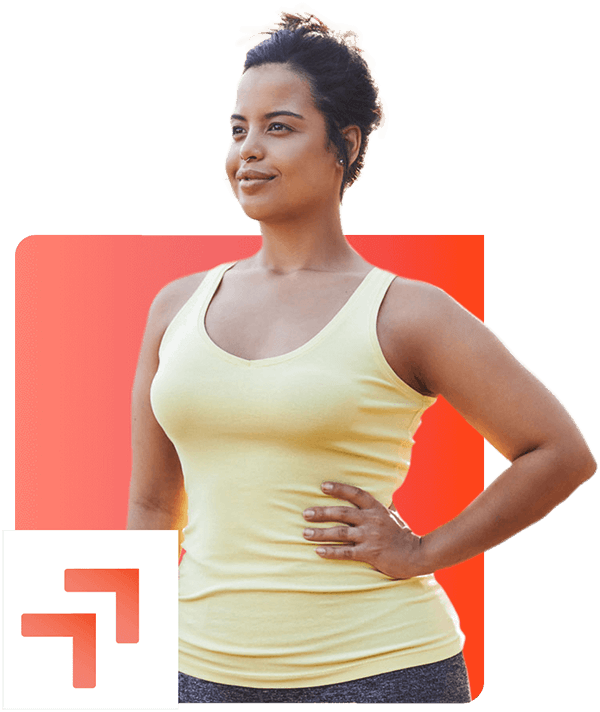 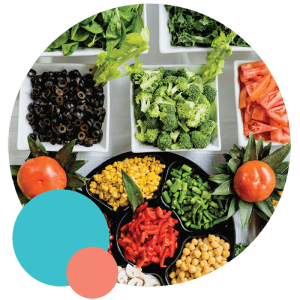 Heart disease and diabetes are linked. Both are manageable and preventable.

Diabetes affects some communities more than others. African American and Latino people are 2-3 times more likely to have diabetes.

See your doctor for regular checkups 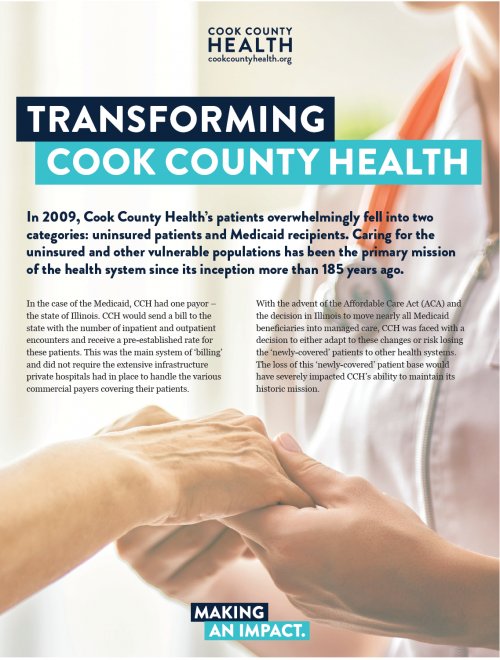 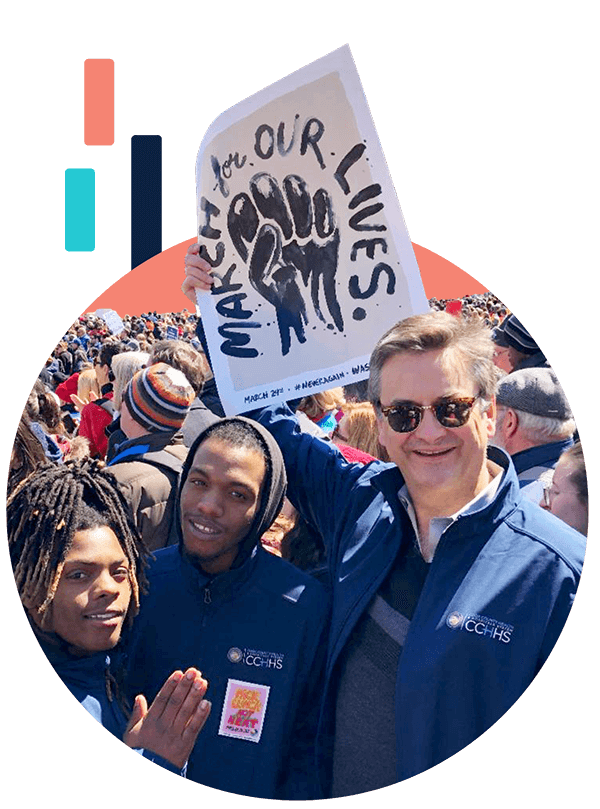 As an urban safety net health system with one of the nation’s busiest Level I trauma centers, Cook County Health is on the front lines of Chicago’s epidemic of gun violence.

More than 1,000 people have been shot in Chicago in 2018. Despite Chicago and Illinois having some of the strictest gun laws in the U.S., it continues to be the epicenter of this modern public health epidemic. The experience in Chicago and Illinois demonstrates why state-by-state laws are not sufficient and why we need federal gun control laws.

Click on our white paper below to learn more about how Cook County Health is addressing gun violence. 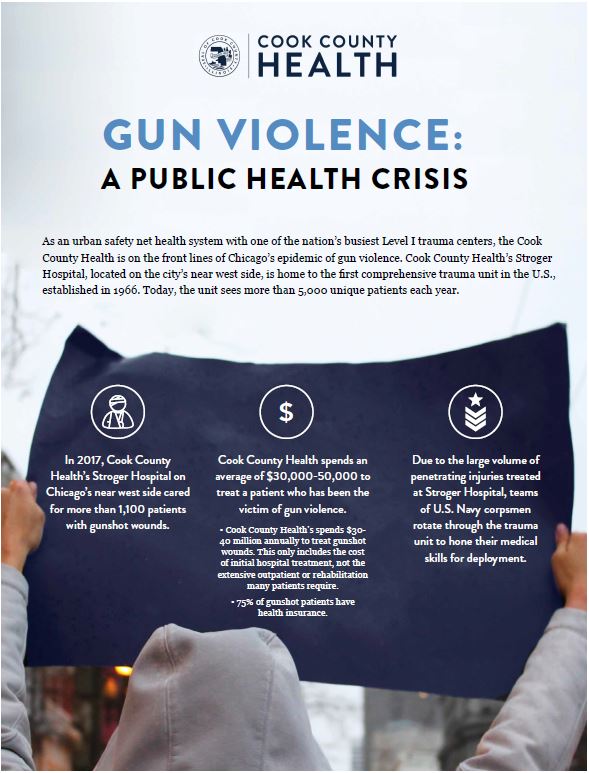 Cook County Health supports common sense gun regulations and other measures to combat the mortality and morbidity caused by firearms, including:

The U.S. is facing an opioid epidemic, and Cook County is not immune. In the last decade, opioid use and abuse has skyrocketed, becoming a public health crisis that shows no signs of slowing down.

Cook County has embarked on a number of initiatives to combat the epidemic of opioid use: 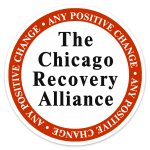 Click on our white paper below to learn more about how Cook County Health is addressing the opioid epidemic. 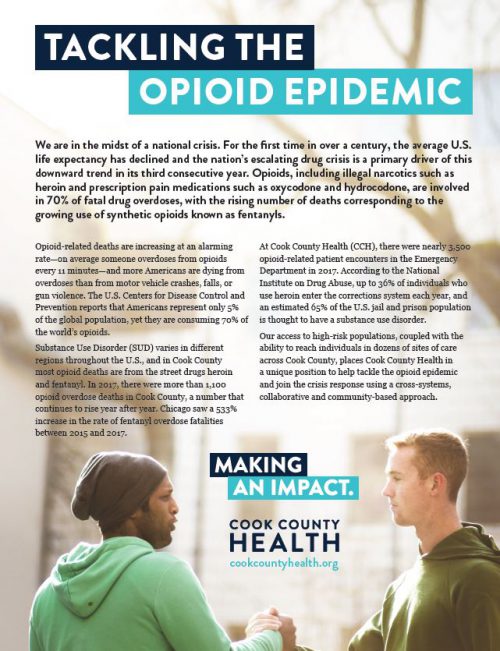 Suicide continues to be a leading cause of death for Americans, taking a life every 13 minutes, according to the Centers for Disease Control and Prevention (CDC). Cook County Health would like to encourage residents to know the importance in recognizing the warning signs in others.

“Suicide is rarely caused by a single factor,” said Dr. Diane Washington, executive director of behavioral health at Cook County Health. “Many people who do not have a mental illness can still suffer profoundly after a break-up, job loss or a health scare. We should reach out to someone who might be struggling to lend a hand in support.”

Although more than 50% of those who commit suicide reportedly have not attained any psychiatric diagnosis, more than 90% of people who commit suicide are found to have at least one mental health disorder such as depression, anxiety disorder or bipolar disorder, according to the American Foundation for Suicide Prevention.

There are effective treatments, like medication and therapy with a mental health professional, to address some of the underlying health issues that put people at risk for suicide.

Despite this, suicide rates continue to increase in the U.S..

Everyone can help prevent suicide by learning the warning signs, removing firearms, medications and other potential tools for suicide among people at risk and contacting the National Suicide Prevention Lifeline for help. The National Suicide Prevention Lifeline at 1-800-273-TALK (8255) is a confidential, toll-free number to people considering self-harm. It is available 24 hours a day, 7 days a week.

In addition, CCH’ Community Triage Center (CTC) in Roseland provides evaluation, crisis stabilization and treatment for patients presenting with psychiatric and/or substance-related crises 24 hours a day, 7 days a week. To make an appointment with a mental health professional at Cook County Health, you can also call 312-864-0200.

Cook County Health and other area hospitals have joined the Metropolitan Chicago Breast Cancer Task Force to close the gap in breast cancer mortality rates between African-American and white women.

From 2006 to 2013, a 2017 study published in Cancer Causes & Control showed that the mortality rate from breast cancer among black women dropped by 13.9 percent, driving it below the national average.

The results were so dramatic that the Chicago Department of Public Health gave the Murphy’s group and its partners –– Cook County Health and Hospital System; Rush University Medical Center; Mile Square Health Center; Sinai Health System and Centro Comunitario Juan Diego –– $700,000 to expand their model, which had been credited nationally for the success. The task force is housed at Rush.

Overall, the goal is to take aim at what experts call structural inequities in the quality of care black women receive.